TX Active Cement - Heidelberg Materials
When autocomplete results are available use up and down arrows to review and enter to select.
Back to Cementitious Materials
TX Active®
Good, Clean Design

TX Active® photocatalytic cement was first used in 1996, in the production of the three graceful precast concrete panels that form the “sails” of the landmark Dives in Misericordia Church in Rome, designed by Richard Meier.

Since then, our research, development and improvement efforts have been an intensive, ongoing focus. Early photocatalytic cements were effective in keeping surfaces clean; the levels of photoactivity achievable with TX Active® cement is such that it actually abates the organic and inorganic substances responsible for air pollution.

Photocatalysis: The Power of Light

Photocatalysis is a natural phenomenon in which substances known as photocatalysts accelerate the n processes that occur in nature. This promotes faster decomposition of pollutants and prevents them from accumulating.

Ever-increasing air pollution in urban areas has compelled researchers to take advantage of photocatalysts to abate the noxious substances that contaminate the environment.

Simply by using light energy from the sun, photocatalysts accelerate the formation of strong oxidizing reagents, which result in the decomposition of organic and inorganic pollutants. For over a decade, photocatalysis has been applied to various materials—glass, ceramic, cementitious binders—to obtain a “self-cleaning” effect.

Architecture in a Whole New Light

TX Active® cement was originally developed to achieve Richard Meier’s strict design specifications for his Dives in Misericordia Church. The goal was to provide pure, white, eyeopening brilliance with aesthetic qualities that will endure throughout the ensuing decades.

Since then, TX Active® has been the cement of choice for many prestigious architectural projects in which the quality of materials and final appearance were equally important in achieving the architect’s original vision. In addition to providing traditional concrete properties, concrete produced with TX Active® cement offers “self-cleaning” properties that help retain the structure’s original beauty for years. 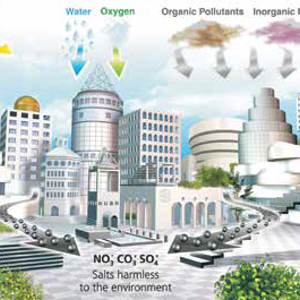 TX Active’s ® photocatalytic properties help protect the environment by abating noxious substances produced by activities such as industry, transportation and residential heating systems. It can be used anywhere cement-based products are used, including:

Concrete is the most widely used construction material in the world, second only to water. Over time, as a result of the build-up of atmospheric compounds in the surrounding environment, concrete will become discolored, stained, dirty and dingy. This course examines photocatalytic technology which accelerates self-cleaning and fights air pollution while maintaining the mechanical and physical properties of traditional concrete.